…is looking much like 2011. And every year before that.

I rarely get homesick for Amerikay, but when I do, it’s for family, friends, and manicures. $10 manicures on my lunch hour. $30 mani-pedi Mon-Weds. I just heaved a massive sigh.

I used to get a manicure a week. Once. A. Week. I can’t even imagine. I certainly don’t bother here — and before you get all INP on me, I’ve gotten manis in Dublin, Paris and London and they have all sucked. NYC baybee — and Manhattan in particular, because even the Brooklyn manicures are rubbish.

I am still applying the Mavala Cuticle Oil, and it peels them off like a mofo. I can’t understand why it doesn’t even seem to end, though. I mean, I know that there will always be skin around my nails, but this seems ridic, like I get one day of smooth and then it’s all crap again.

I have been remiss as regards the OPI Nail Envy Nail Strengthener, and I know that’s on me. I’m even sitting here this very second, as I type, looking at it but not picking it up and using it. Hopeless.

One thing I have been procrastinating about is trying out the Sally Hansen Salon Effects Real Nail Polish Strips. I had taken a set out of the packaging and looked at them before Christmas, even held one up against a thumbnail, and then decided to bring them with on my hols… and then I figured, I’ll just get a real manicure, so they never even made it out of my case. And I didn’t get a real mani either.

I do believe I am entirely apathetic about the state of my fingernails.

Despite having come to this conclusion, I decided to give these a go. 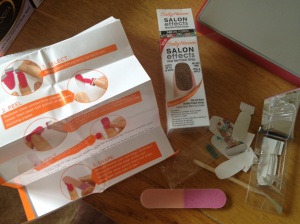 At left, the carnage.

You get a wee nail file, an orange stick, and two packs of nail strips, all sized to fit the variety of your fingers. I took up a thumbnail strip, peeled off the protective plastic and stuck it to my nail… but it didn’t stay stuck… so I tried another… no joy. WTF?

Then I figured that using the strips that had been sitting around in the open air since before Christmas was a bust. I reckon this is like leaving the cap off your nail varnish bottle for almost two months and expecting everything to be a-ok?

Into the untouched pack, and eureka, it works! Well, it sticks to the nail, anyway. I Had a whole bunch of excess hanging over my nail bed, that I kind of poked at until it peeled off. You are directed to file away the extra bits at the top, which totally did not work, so I cut most of it off, and then wrapped some of said extra over the top of my nail. 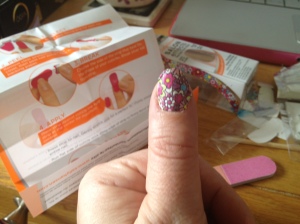 Yeah? Okay. Less muss, a bit more fuss, but that looks pretty good, except you can’t see the raggedy edge on the right side of my nail. LOVE the pattern, and I’m keen to see if this makes it through horseriding tonight — hmm, this maybe why I have relegated nail care to the basement of my House of Beauty. The gloves make a mess of everything but shellac. Once, I tried to preserve a Verrrrry Expensive mani I got in Harrods, and rode without gloves one lesson, and the varnish still chipped anyway.

You know, I am such a lazy bones I may not even finish this hand? Because then I’d have to do the other hand. Like, one nail is kind of funky, but only five out of ten fingers? I don’t know if I can pull that off.

I’ve done a swing around the ‘net, and everybody is better at this nail thing than me. Go here for evidence of how someone who is not crap at their nails does a nice job with these. SAD FACE.