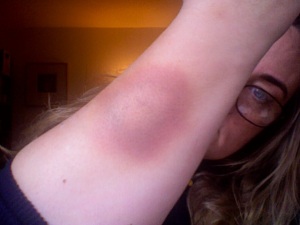 I posted this image on my horse blog, because I like to keep my readers apprised of the latest havoc wrecked upon my bod.

You can read all about the genesis of that bruise via the link, if you like.

Having attended the recent launch for Cicaplast Baume B5 by La Roche-Posay (€12.50), it only occurred to me after the fact — the fact being that we had a live Twitter feed provided at the event and I could have asked this question then — that this stuff might be good for that bruise.

During the presentation, the BB5 was represented as purely fool-proof for dry, irritated skin; as a ‘store-cupboard’ essential, as it is safe for use on infants and children; and as a miracle worker for those who have skin conditions the like of eczema. The results, as presented by Dr Geraldine Morrow and practice nurse Selene Daly, were compelling, and while I prefer to try and test products under the proper conditions, I didn’t really want to start cracking and peeling in order to determine its efficacy for myself.

I had forgotten about the bruise, you see, because it doesn’t hurt, even though it is gobsmackingly colourful, and massive.

Now, I had used the regular Cicaplast, which is generally used after skin treatments like peels, on the bit of my shin that had gotten kicked by a horse, and talked about it here — this post is turning into links within links, but the thing is: will the new stuff do the job, or is the other stuff the way to go?

The damn thing is big enough to try them both simultaneously… ah, sure, feck it, may as well try the new stuff. It’s not like it’s going to make it worse.

Okay, took this photo yesterday {photographing your own arm is very difficult.} Now, you can see that it is healing, but it’s still got a ways to go. I applied the BB5, and found the texture to be light and soothing, and the absorption rate to be very good.

Don’t squeeze out too much, because it’s unnecessary. The coverage is excellent.

I spent a long-ish day at the laptop yesterday, and so applied more before I went out to co-facilitate the writing workshop I’m doing in Blackrock*. I was wearing a short-sleeved dress-top, and no one recoiled at the sight of my arm.

Huh! This is today’s shot. Look how all the black is gone, and the whole thing is turning that awful yellow, which means it is really on the road to recovery.

Now, I’m no doctor, but I am something of a bruise expert, having always been a tender peach, and this is pretty remarkable.

I am fairly certain that there will be other bruises with which to conduct experiments from the beginning, so stay tuned. Unless they are on my arse — been known to happen! – then you’ll just have to take my word for it.