I have been gasping to get my hands on one o’ these yokes for ages. The BaByliss Perfect Curl has been an absolute unicorn in my life. Given my column in The Herald, and my assiduous blogging in this corner of the internet, it proved to be impossible to secure a sample of this implement from the brand’s public relations representatives. So, off to the googles I went, and came upon a site that was selling them for an incredibly good price* {hint: ‘cheap babyliss curl’} and it was in my hot little hands in about ten days.

How badly do I want curly hair? That desire was tested in the extreme.

I plugged ‘er in, and waited while she juiced herself up. I kept my specs on, as I needed to read the directions.

They were pretty straightforward:
> Always have the gray dot that appears on the one side of the implement pointed towards your head. This has something to do with heat, and not burning yourself.
> Choose how long you want your dry, clean, well-brushed hair to cook {12, 10, 8 seconds; there is also a 0 in that section, which makes absolutely no sense to me.}
> Choose which direction in which you want the hair to curl {Left, right, auto}{Chose auto, seriously, why make this any more complicated?}
> Take a 3mm-wide hank of hair, lay it into it in the maw of the implement and clasp it closed.
> When it beeps four times: release, emit curl.

Oh, yeah, and clip your hair into smaller hanks. 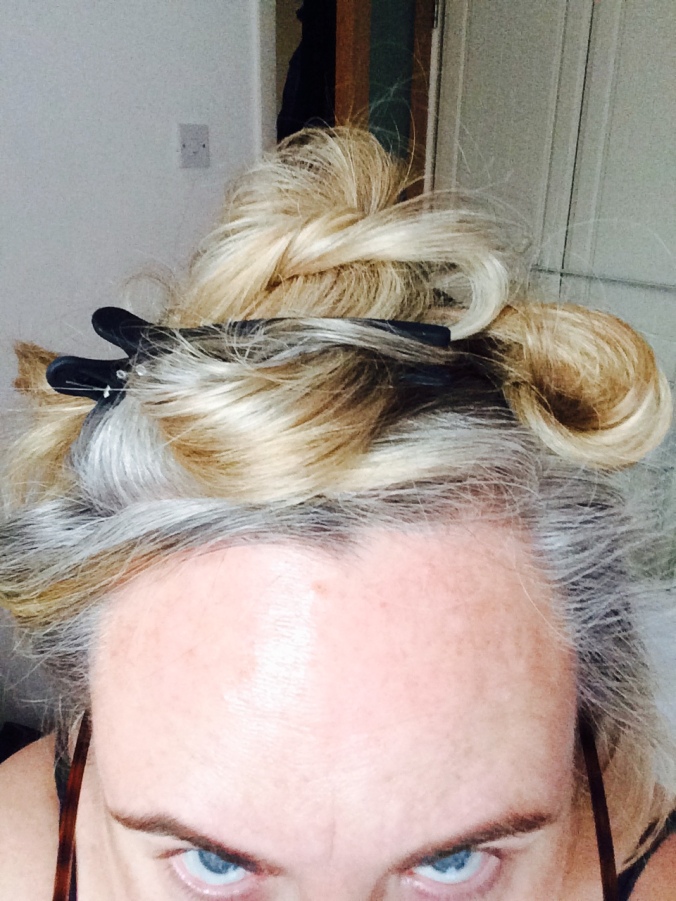 Because if you’re me, you’ll start out with the best intentions and then get bored stupid, and begin grabbing bits of hair, rhymelessly and reasonlessly, just to get it over with.

I began, after a few false starts — to the point where I’d cocked it up so badly that I had to turn the implement off, and turn it on again.

What happens is: if you’ve put too much hair in the thing, it kinda groans as it tries to pull all that hair into itself. It will also beep four times and then make no noise at all, so you know that you’ve done it wrong. I did it wrong several times, and once you stop squeezing it closed, you hair basically falls out of it.

No hair was harmed in the making of this post. 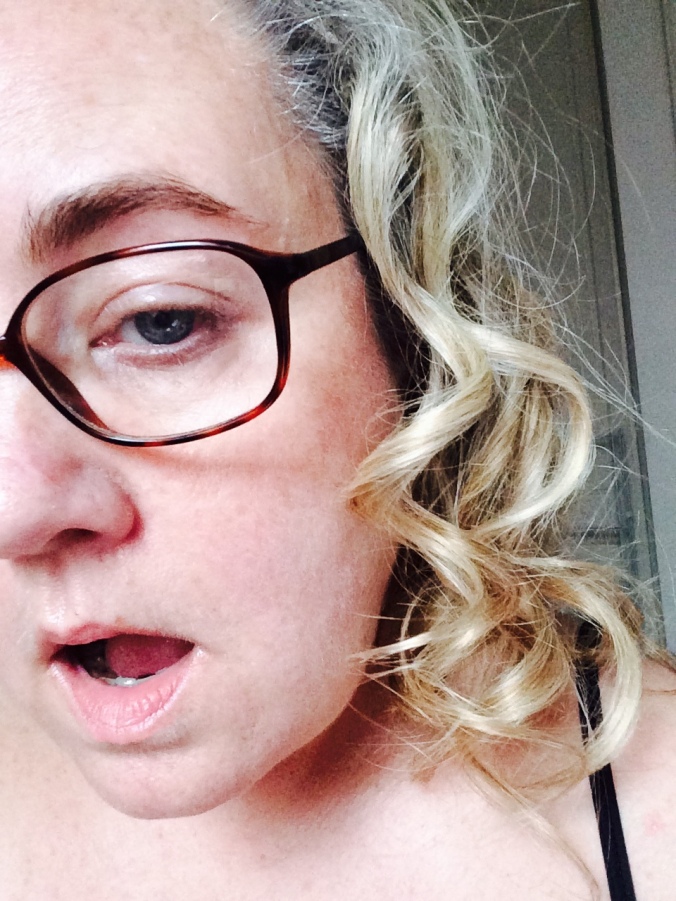 Holy God, this is only halfway, and I want to kill someone.

Things I learned at this stage:
> If you think you’ve brushed your hair properly, brush it again. The tangles that lurk, even when you think you’ve done a thorough job of it!
> Take the smallest hank of hair you’ve ever held in your hand, in the whole of your life — then divide it in half. And divide it again. This is the amount of hair that will be successfully be drawn into the maw.
> Use clips. I would have been lost without these:

Is it worth it? 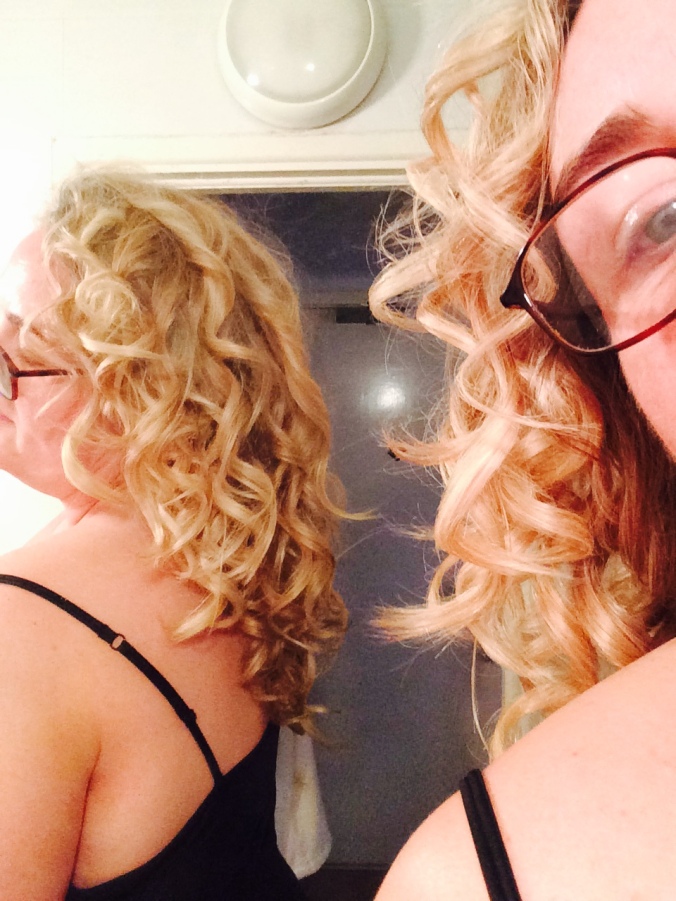 I think that once I get a hair cut, it’ll look less straggly at the ends? But those poor ends were the initial tresses that got the brunt of my inability to do it right; had I not had more than enough of curling, I would have gone over them again.

I officially powered down at 15.44. So with mistakes, and turning off and back on: the guts of 40 minutes to do this head.

The head felt awfully top heavy, so I finger-combed a bit.

Okay, I think I do like it. It seems really dry and flyaway, though — and this is second day hair, as well. Maybe next time, so that it takes even longer, I’ll use a styling spray on each miniscule lock of hair.

***
THE NEXT DAY. Now: I did all the curling yesterday, and never left the house, so there was no environmental wear and tear. I blasted the roots with dry shampoo and twisted it up into a knot, and slept. I combed it out lightly, and thus: 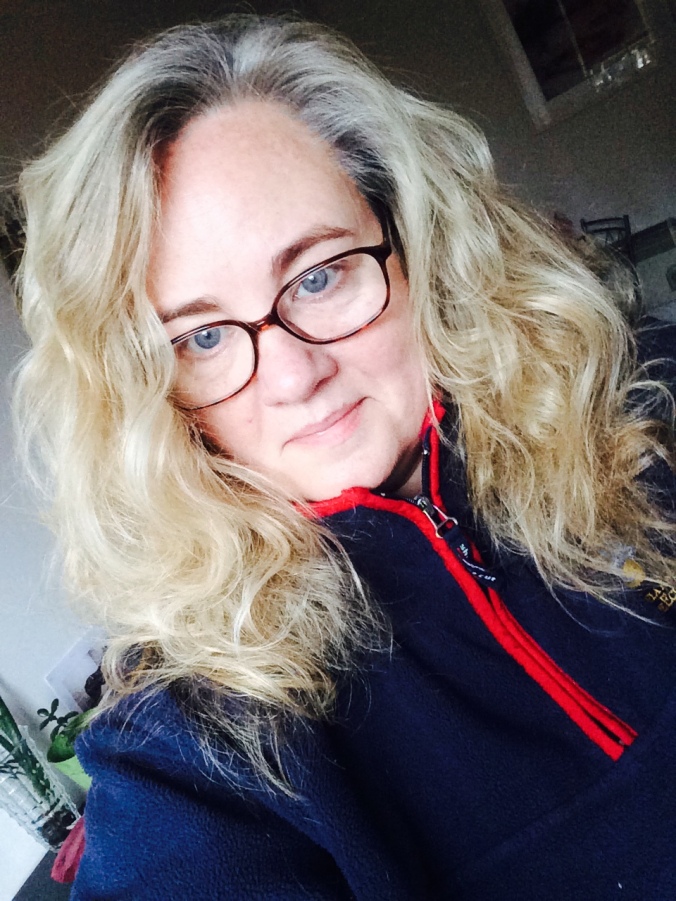 I haven’t used hair spray in about a decade, but think that if I was going out and intending to keep this hair looking good, I’d have to use some class of holding product.

I also feel like I’m always fiddling with it, making sure it is okay and wavy and fluffy and voluminous.

Verdict? High maintenance; wouldn’t do it everyday; but totally worth it.

*Thanks to lovelygirliebits for the heads up {ha, ha,} re: the benefits of googling this object.

One thought on “BaByliss Perfect Curl: Is It Worth the Effort?”