I remember — oh, let’s do this right. Once upon a time, back in The History of The Hair, there was a spray, a spray used by all the fairest in the land, which made no sense to me, because it smelled really, really bad. It was called Aqua Net, and it stank like dirty socks. It was, in a word, awful.

But there was nothing else. Nothing else that was suited to the limited financial resources of a high school girl. Or else, it was the hairspray that the cool girls used, so in the desire to be cool, we the uncool used it to. Or it was an elaborate conspiracy on the part of the cool girls to lure we the uncool into using it so that our heads smelled like the locker room at the end of a full day of PE.

Anyway, that’s what one used. And eventually one grew up {hmmm, questionable!} and lived in Brooklyn and worked in Manhattan, and began to use a concoction by Aveda, called Firmata, that was like… it was like shellacing your hair so that it would not move for a week. Which was spectac if you were at a roof party, or a river party, but not so great if you’d scored at one of those parties and maybe wanted the dude to touch your hair without drawing blood. It smelled so pretty that it drew them in, oh yes it did, but then proceeded to cut their fingers to ribbons.

And then … one has not used much spray of the hair lately, until this dropped in for review: Fudge Urban Iced Coconut Cocktail Hair Spray. It claims 48hr Texture Hold, which: maybe, but I put so much stuff in The Hair, I’d have to have nothing in it to prove that this actually works.

What does work is its hold-without-the-frozen-beyond-movement effect, and its scent is incredibly appealing… but also a bit sweet and youthful. I’ll cop to the latter. The former? Em, no. Plus: serious clash with one’s chosen fragrance-of-the-day.

The thing is, I have so much coconutty product on tap — The Body Shop Coconut Body Mist is sitting at my right hand, wistfully waiting to be applied — that I could conceivably layer myself like a piña coloda. If it didn’t feel age inappropriate. 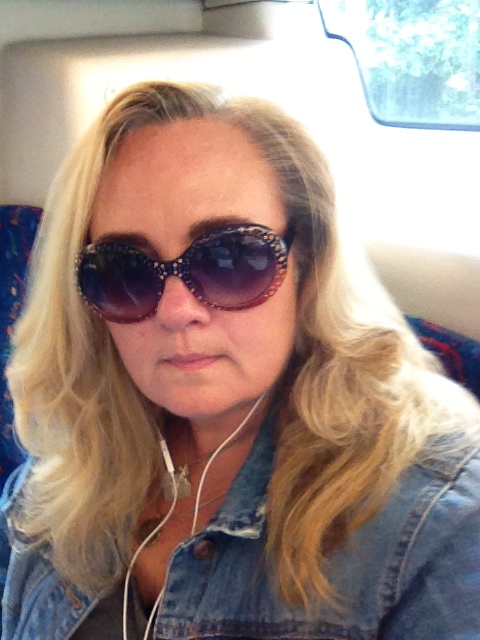 Oh, herllooo 46A bus, it has been an age since we snapped a selfie from the back of the bus. That is a full-day’s-work, on-deadline head of hair. That held over the course of about ten hours, door-to-door, including two brushings.

Hmmm. There’s an Iced Raspberry and Vanilla flavour — would smelling like a smoothie be less morto?