{We’ll get into peels at some later stage, because they do the business, but for now, let’s sit up here on the high horse, ‘kay?}

I mean, the skin is deep and complex, and I’m no scientist, but a topical that makes a measurable difference? Yeah, right; and next you’ll be telling me that boob creams work. 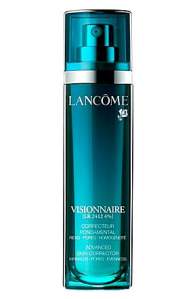 At the launch of Visionnaire, back in whenever this year, there was a presentation {waah} that was really quite learned and informative. The journalist doing the Q&A with the Science Lady was actually a scientist in a former life, and had an excellent grasp of the whole thing, until it got so sciencey that we all started shuffing around {I saw you, people, don’t deny it!}, checking for texts — texts that demanded we run out of the Morrison Hotel to save a child from a fire — and wondering if the chicken-on-sticks things were going to make another round.

Then we all got our samples and went home.

Dubious, I began to use it. I began to see a difference. People began commenting one how well I looked. One wee pump of product covered my roundy face perfectly, and my skin actually felt taut and supple, which seems like an oxymoron.

Now I wanted to know how it worked, because it was working.

The whole sciencey bit at the launch was about a molecule called LR 2412, the key element in the serum. There’s a video on the Lancome website that weds phrases like ‘designed to fuse with the skin’, ‘penetrating through skin layers’ in a ‘cascading series of micro-transformations’ ‘based on in-vitro testing’ — with fancy visuals that look like PSP for the derma.

Geez, I must have totally daydreamed my way through biology because I didn’t even know what a molecule was: ‘A group of atoms bonded together, representing the smallest fundamental unit of a chemical compound that can take part in a chemical reaction.’

Still with me? Fair play to you. The whole point of this product is that is it meant to do the stuff that Botox and other overt chemical interventions do. If, as according to the video, the LR 2412 molecule zips around setting off lightning-like transformations deep in the skin, via a cream, then it’s nothing short of a Santa-esque miracle.

I would have been happy enough to have gotten a stocking filled exclusively with this stuff.* It wasn’t like my wrinkles disappeared overnight; rather, Visionnaire has evened out my skin tone, which it says it will do, and it also looks like some incipient dark patches have been minimized if not completely disappeared.

Do I believe that they will disappear entirely? I am afraid to say a definitive yes because I am cynical, but I am cautiously optimistic in a thrilled sort of way. Meaning, I guess, that I want to believe, and am willing, deep down, to be convinced.

*But didn’t, so nope, don’t believe in Santa. Maybe the Easter Bunny can take up the slack?