See? Oscar noms! Let’s look! Even though I haven’t notion what half of them are? 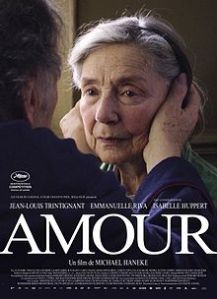 I did see Lincoln, which = amazeballs, or however Tony Kushner would write that in 19th century American. The balls that do amaze indeed, sir. >?

DDL FTW; also Tommy Lee Jones, whom I adore, in the Best Supporting Actor category, and all other categories.

I started crying just looking at the Amour poster. Anyone seen this movie? Can you be nommed as Best Pic and Best Foreign Film? Apparently you can! BMcC just informed me via Facebook that this is about Alzheimers? Uh, no, thanks but I need my eyes, I can’t risk crying them out.

Also: do not want to ruin the great look I get from Maybelline’s new launch {LOL > wait for it} Volum’ Express: The Rocket, featuring the new, exclusive Elastomer brush, aka the Jet-Glide.

The applicator is one of the spikey sort, but the bristles are flexible. Many that fall into this class of wand are not in the least bit flexible, and I must say it makes a difference. It felt like I was combing on the mascara, rather than pasting it on.

It didn’t prevent the dreaded splotch-on-the-eyelid, which I cop to as operator error, but honestly, I had my head tipped allll the way back.

I had given a lukewarm review to the Colorsport 30 Day Eyelash & Brow Dye Kit. I didn’t get to Sephora when I was in NYC —  I know, I know, it’s a like a priest skipping an audience with the Pope. I had planned to get some super-amazing American brand of eyebrow dye, but having given the Colorsport another chance,  I’ll revise that initial impression a little.

With a caveat: because I completely disregarded the instructions, i.e., I forgot I had it on, and took a phone call and got distracted and started working on something and then WHOOPS — many, many more minutes than directed went by.

They look good! There has been no intervention by a cosmetic enhancement.

But I’m not telling you exactly how longI had it on — what if you do it and don’t like and get all up in my grill? DIY!

Maybelline New York Volum’ Express The Rocket and Colorsport 30 Day Eyelash & Brow Dye Kit are both available at Boots. The Rocket comes in a waterproof version if you decide to watch that film. Bonne chance!